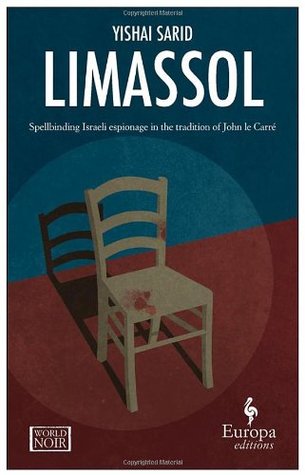 Israeli author Yishai Sarid’s espionage thriller is compared to the work of John le Carré with this novel but I don’t really see it, although there are some elements about it that remind me of him. While Limassol is definitely within the spy thriller camp there are also some traditional and “Mediterranean Noir” elements - along with a more Literary approach - fused within it as well.

The unnamed protagonist is an interrogator for the Israeli secret service, is about forty, is married and has one child, a four year old son. He is dedicated to keeping Palestinian suicide bombers off the streets and is known for his more brutal ways during an interrogation (two suspects die under his interrogation). Right from the beginning there is a tone of alienation and our protagonist is alienated from just about everything - society and his family in particular(his sense of detachment is so severe that he consistently refers to his son as “the child” throughout the entire novel). Due to the deaths of the two Palestinian suspects, they reassign him: to go undercover as an aspiring novelist and befriend a well known Israeli writer named Daphna and a cancer stricken Palestinian poet named Hani. The target of the assignment is Hani’s son Yotam - a wanted terrorist who is in the midst of plotting an unknown (and possibly spectacular) terrorist plot within Israel. With his marriage falling apart (his wife leaves him to take a job in Boston, taking “the child” along with her), and getting more emotionally and personally involved with Daphna, Hani and Yotem, his once uncompromising sense of right and wrong get called into question. In spite of it all, he forges ahead with his new assignment and it’s the slow burn of the novel which keeps the reader engaged to the very end.

The plot itself isn’t so original and this isn’t really what makes the novel in my eyes. To me, it’s more about what is lying just under the surface, the “unsaid” about the complicated nature of the Israeli-Palestinian conflict; the seeming “differences” between the two cultures living side by side - at its heart - not being much different from one another; how easy it is to cross the line and become the enemy you are fighting; and how often grey the world turns out to be through the eyes of one who normally views it in black and white. An entertaining read, especially for those who love noir fiction (it’s closer to this than spy/thriller). Also great to get a glimpse about a society you don’t normally read in the newspapers. Recommended.