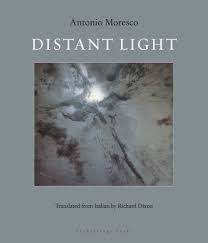 A short novel full of rich prose and symbolism and yet another example of the fantastic literature being produced by Italian authors over the past decade or so. “Distant Light” is a hard novel to describe — surreal, dense, probing — it’s the kind of novel that will keep you thinking about it long after you read it.

The unnamed narrator is living in an abandoned village, presumably somewhere in Italy although this isn’t specifically mentioned. Judging from the references to the Balkans and Albania as the narrator encounters some people on his excursions away from the village, it could be somewhere in Calabria but this is only a guess. The protagonist is living along in an old stone house, long since abandoned, for reasons we’re not sure why, exactly, though there is a very brief reference of him of once being in the military. Had his experiences there make him want to ‘disappear’, as he says was his reason for making his home in this village? There is no one around except the animals and insects he sees and sometimes converses with as he sits outside gazing out across the gorge towards what he notices to be a single light that appears at the same time every evening. His curiosity gets the better of him and he begins to investigate the source of the light.

As he begins to ask questions — to the locals who live in the next town down the road from his old abandoned one — there is a sense that something is a little off. The town folk are a little off kilter, strange, as if from another world, one of whom claims the source of the light was probably from UFOs. Not actually buying this explanation, he takes it upon himself to investigate the source. He discovers another abandoned home, directly opposite his own on the other side of the gorge. In it lives a young boy, all alone. Shocked by this discovery he wants to know more about the boy. Who is he? Where are his parents? Why is he living alone in this abandoned home in the middle of nowhere? The more he gets to know the child, the more is slowly revealed and to give it away here would spoil this wonderful story.

Rich full of symbolism and probing questions, coupled with the almost dream-like world Moresco paints with his use of language, we encounter a man who questions his place in the universal scheme and coming to recognize how small and insignificant he is with in it. There is a mystery surrounding the entire novel, a mystery as perplexing as the questions the narrator is constantly asking the natural world around him (which naturally doesn’t respond). His encounter with the child only entices more questions than answers, answers mankind has been asking itself since time immemorial, the answers always elusive and just out of one’s grasp. Reading it, you feel as if you’re peering inside someone’s dream, this seemingly ‘lost world’ where everything is vivid and real but at the same time elusive and vague. Ultimately we learn that one can never truly ‘disappear’ or be ‘utterly alone’ since the drive for human contact is too strong to ever let go of. This is a truly thought provoking novel and I can’t recommend it highly enough. It will get you thinking about your own place in the scheme of things, keep you asking what it all means, if anything at all. I promise you that this novel will deeply touch you and this, if anything else, is what great literature is all about. Highly recommended.