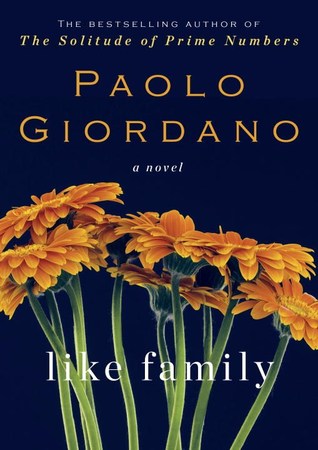 This was a tough novel to read. My father had passed away from cancer over twenty years ago yet the loss remains with me as if it happened yesterday. An exploration into mortality and grief, Paolo Giordano has again written a very thought provoking novel.

The author’s third in English translation, ‘Like Family’ differs from his previous two as they differed from one another. Giordano is an author you can’t peg down as to what he will do next and I think this is a great thing. Nevertheless, this short novel packs a serious punch and anyone whose family had been touched by this dreaded disease will be able to relate, though it may be tough to get through because of it. I almost gave up half way, not because it was badly written or the story didn’t grab my attention, but because it hit just a little too close to home.

The story revolves around a marriage between a physicist and his wife and their three year old son. “Mrs A.”, the nanny they hired to look after the boy, is the focal point of the story. An older woman who imbeds herself into their life as if she were one of the family and they come to treat her as such, especially the three year old Emmanuel, who looks upon Mrs. A as his ‘grandmother’. Mrs A is feisty, opinionated, set in her ways but she loves the family dearly and they love her. When she is diagnosed with cancer, the fabric of this seemingly perfect middle class family begins to unravel.

As the unnamed narrator explores themes such as mortality and grief, Mrs. A’s illness seems to mirror what his happening in his marriage, as if somehow a ‘cancer’ has invaded it, slowly eating it away. Without Mrs. A being the foundation on which his family seems to rest, it slowly begins to wither away, dying along with her. The narrative switches back and forth between the narrator’s frustrations with his family life with Mrs. A’s past, where she was married to a man named Renato, and how she herself had to deal with his rapidly deteriorating health issues.

The theme here is sickness and decay, the fleeting nature of time, yet it’s not at all depressing in the way you’d think. There is light here which can only be described as touching. If you’ve had a family member going through such an illness, this book may be tough to take but it’s handled beautifully, with all its conflicting, roller coaster ride of emotions. Yes, it’s a very sad book but there is hope, a light at the end of a long dark tunnel. Giordano is one of the better novelists out there today (one of my contemporary favorites, at least) and I highly recommend this book — as well as his two previous novels, “The Solitude of Prime Numbers” and “The Human Body”, both of which were extraordinary.