'Save Twilight' by Julio Cortazar 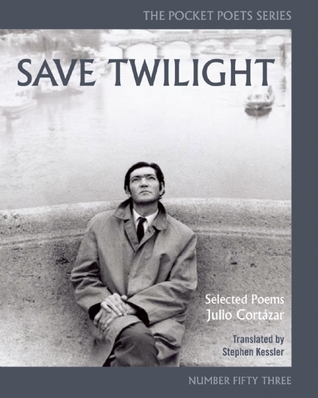 This is a second edition of an older publication. The first edition came out a number of years ago via City Lights. The older edition, inexplicably, was a highly truncated version of Cortazar’s 1984 original, the last of his publications in his lifetime. It is a collection of his poems, written throughout the course of his life, along with some prose pieces.

I’m glad that this edition finally emerged, giving the reader the experience of how Cortazar intended the book to be. The poems within are highly influenced by the symbolist poets — lyrical, sometimes surreal. There are hints in many of them for the work to come, namely ‘Rayuela’ (‘Hopscotch’). Otherwise these poems are very different from the kind of writing he’s known for, the more ‘fantastical’ style he employed in his numerous short stories.

There are many wonderful poems in this collection and having a chance to read the previously unpublished (in English) poems was a real treat. We travel along with the author in the cafés of Paris, the streets of Buenos Aires, the airports of his numerous travels, the sidewalks of Nairobi, the steamship from Europe to South America. The poems are intimate, playful, experimental, formal, with a whole range of emotions which give the reader a glimpse into the author’s day to day life.

It had always been a mystery to me why the original edition was such a truncated version but after reading the new introduction it was clear that City Lights publisher Lawrence Ferlinghetti had ‘very clear ideas about the nature, size and scope’ of that edition. I’m happy to see that the full version finally emerged. It is much better, more ‘playful’, including some prose pieces which describe Cortazar’s process of putting the book together.

For fans of Cortazar, this is a must. For those who have read only the first edition, do yourself a favor and pick this one up as well. It’s vastly improved now that it’s restored to it’s original version.